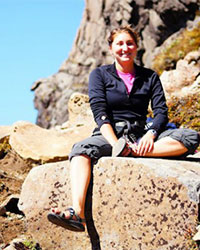 Alli grew up in Southern Colorado, and although she missed the dry air and consistent sunshine, she quickly fell in love with the Pacific Northwest after attending college at the University of Puget Sound. She studied biology and environmental sciences and spent a semester living in and studying the many ecosystems of Ecuador. Since she graduated, Alli’s summers and falls have been wonderfully consumed by leading wilderness trips for students in Washington, Montana, and Alaska. She has spent multiple fall seasons in North Carolina as a leader and program director for the same company’s school programs. In between, she spent half of a year backpacking, skiing and exploring New Zealand. Alli currently lives in Seattle and works as an outdoor educator and is the Guide Program Assistant at Alpine Ascents International. As an avid back country skier (and wanna-be mountain biker) she loves exploring Washington’s mountains and will take any opportunity to go skiing in Canada.